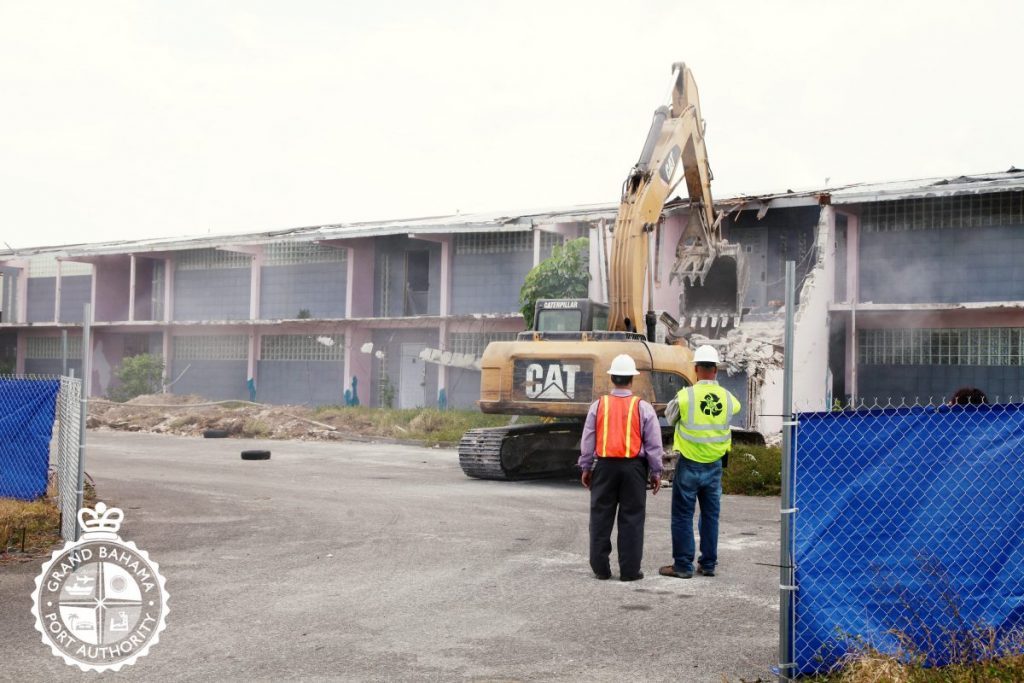 Wednesday March 7th, 2018 the Building and Development Services Department of the Grand Bahama Port Authority, Limited (GBPA) began the demolition process of the Pioneer’s Professional Plaza on Pioneer’s Way. The plaza had fallen into a state of disrepair after successive hurricanes. This is why GBPA took the initiative to exercise all measures to cause either the repair or demolition of the iconic building.

Henry St. George, Vice President at GBPA, noted that “It’s an important move for the community to see the scars on the landscape due to economic woe and hurricane damage actually being brought down and this site, which should represent prime real-estate in the city center, will have an opportunity to have a new beginning and new construction to take place rather than having this scar on the landscape.”

“This is the manifestation of the Grand Bahama Port Authority’s ongoing responsibility, where buildings have a lot of structural integrity or where they pose a potential damage to the public,” stated St. George, who further shared that this landscape will be a great opportunity for local entrepreneurs and that the GBPA will support them.

Rupert Hayward, Executive Director at GBPA said “This is a start of the wider city clean up, but it’s really a continuation of the good work that’s been happening over the course of the last months and years”. Hayward also stressed about how the illegal dumping and littering has a negative impact on our city.

Nakira Wilchcombe, Director of the Building and Development Services stated that over the past three years a list of derelict buildings throughout the city were assessed by an independent structural engineer.  The Pioneer’s Professional Plaza represents one of nineteen assessed that is being demolished that are on the Port Authority’s list. She also advised that the cost of the demolition is around eighty thousand ($80,000) dollars.

Assistant Superintendent of Police Gregory Lockhart expressed his satisfaction in seeing the building being removed. He explained that for some months the police department has been receiving calls about people living in the abandoned building and he is relieved in the fact that it will no longer be an issue. He also encouraged citizens to refrain from entering the building or demolition site, as it can be a threat to their safety and well-being.

Many of the residents are more relieved to see the removal of the building led by GBPA. Some even stopped on their route to witness the demolition of the long-standing Pioneer’s Professional Plaza.