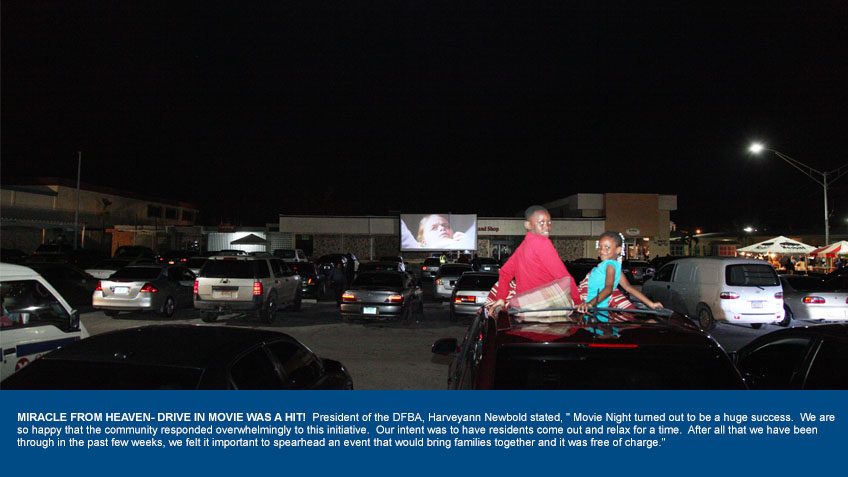 December to Remember is turning out to be a welcomed addition in the City of Freeport, with organizers already witnessing success thus far.  The Grand Bahama Port Authority’s Invest Grand Bahama Small Business Bureau (IGBSBB) is the primary sponsor of three events geared at getting residents in the mood for the holidays.  In collaboration with the Downtown Freeport Business Association (DFBA), IGBSBB held the third Movie Night on Friday, December 9th, representing the first in a series of three events to be held during the month of December. The vintage drive in movie affair attracted scores of movie goers to the centre of the Downtown area, who began arriving almost two hours to showtime, underscoring the level of enthusiasm for the complimentary undertaking.

The night was perfect for the viewing of the movie, Miracle From Heaven, as cars parked with families and couples all spending quality time took advantage of the cold weather and crisp breeze to get comfortable for a movie, which highlights God’s love and miraculous healing of a little girl.  Seating was also made available for residents who wished to view the movie from the big screen placed directly in front of Park -n-Shop for all to see.

President of the DFBA, Harveyann Newbold stated, ” Movie Night turned out to be a huge success.  We are so happy that the community responded overwhelmingly to this initiative.  Our intent was to have residents come out and relax for a time.  After all that we have been through in the past few weeks, we felt it important to spearhead an event that would bring families together and it was free of charge.”  Newbold went on to state that not only were families able to enjoy a wonderful evening,  but for vendors at the event, it proved to be worthwhile as well.  ” We made sure to have on hand, everything that would make movie night ideal, such as nachos, hamburgers, hotdogs, wings and of course popcorn.  For vendors selling those kinds of items, it was a great evening.  We are happy that we were able to pull it off.  I must say, Movie Night appears to be catching on very well.”

Senior Manager of Business Development and Invest Grand Bahama (IGB), Derek Newbold, indicated that the GBPA was proud to be the main sponsor once again of the Movie Night, here on Grand Bahama. “The holiday season is about family, it’s a time for getting together and enjoying each other’s’ company. Drive-in movies always proved to be an exciting experience and I think with this effort we were able to capture that feeling of enthusiasm.”

The second event being sponsored by IGB is Freeport Flash Friday, slated for this Friday,16th, December, where participating stores throughout the city of Freeport will be offering major sales discounts of up to 50%.  Midnight Madness in the Downtown area, where stores will continue with significant sales by lowering prices, is slated for Friday, December 23rd and will close out the December to Remember calendar of events.  Prior to the night of the 23rd, however, in which Midnight Madness kicks off, there will also be a major gift giveaway and costume parade at 12pm, where children dressed in costumes depicting the holidays will be given Christmas presents, with a similar undertaking to take place again at 8pm.