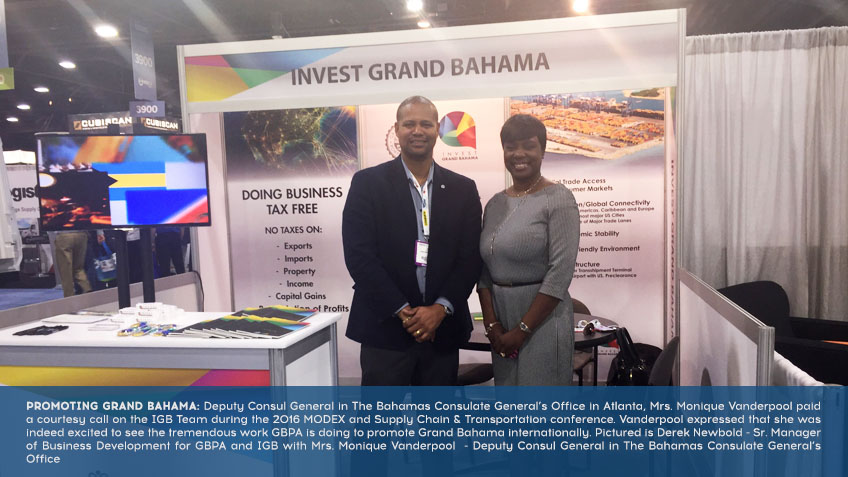 Noting that the meeting with ABL was strategic in growing awareness for Grand Bahama, Newbold shared that it was one of two major meetings planned during the trip to promote opportunities for trade and investment on the island.

“The Atlanta Business League is a highly respected organization, representing thousands of small and medium enterprises in the Atlanta area. They are also a recognized voice in the Atlanta business community,” stated Newbold.  “There are several businesses within their membership that are interested in cross border trading and business expansion opportunities. The leadership team at ABL found Freeport’s geographical location, infrastructure and concessions quite appealing,” he continued.

Ms. Leona Barr-Davenport, President & CEO, accompanied by Ms. Eleanor J. Chin, the organization’s Vice President of Operations, represented ABL at what they remarked as being an enlightening and very productive meeting. Both Barr-Davenport and Chin expressed delight that they were able to meet, and extended ABL’s support to promote the Freeport opportunity amongst its membership.

“It was our pleasure to meet with Mr. Newbold and Mrs. Dames” she said. “We truly believe that there are opportunities for our membership, and we would like to continue these discussions in the coming weeks with a view to isolating specific opportunities for certain members.”

Deputy Consul Vanderpool, who also paid a courtesy call on the IGB Team during the 2016 MODEX and Supply Chain & Transportation conference, expressed that she was indeed excited to see the tremendous work GBPA is doing to promote Grand Bahama internationally.

Newbold advises that talks with ABL executives continue as both IGB and ABL work to build strong networking opportunities for commerce. The possibility of a near term trade mission to Grand Bahama is also being discussed.